The Skills System works to produce and support both books and peer review journal articles (on open access) that focus on improving the availability and access to psychologically-based therapeutic supports for individuals with complex learning and behavioral health needs. Our program engages in and supports outside teams conducting both quantitative and qualitative research.

An updated version, The Emotion Regulation Skills System: A DBT™-Informed Approach was published in 2016.

Informed by the principles and practices of dialectical behavior therapy (DBT), this book presents skills training guidelines specifically designed for adults with cognitive challenges. Clinicians learn how to teach core emotion regulation and adaptive coping skills in a framework that promotes motivation and mastery for all learners, and that helps clients apply what they have learned in daily life. The book features ideas for scaffolding learning, a sample 12-week group curriculum that can also be used in individual skills training, and numerous practical tools, including 150 reproducible handouts and worksheets. The large-size format facilitates photocopying. Purchasers also get access to a Web page where they can download and print the reproducible materials. 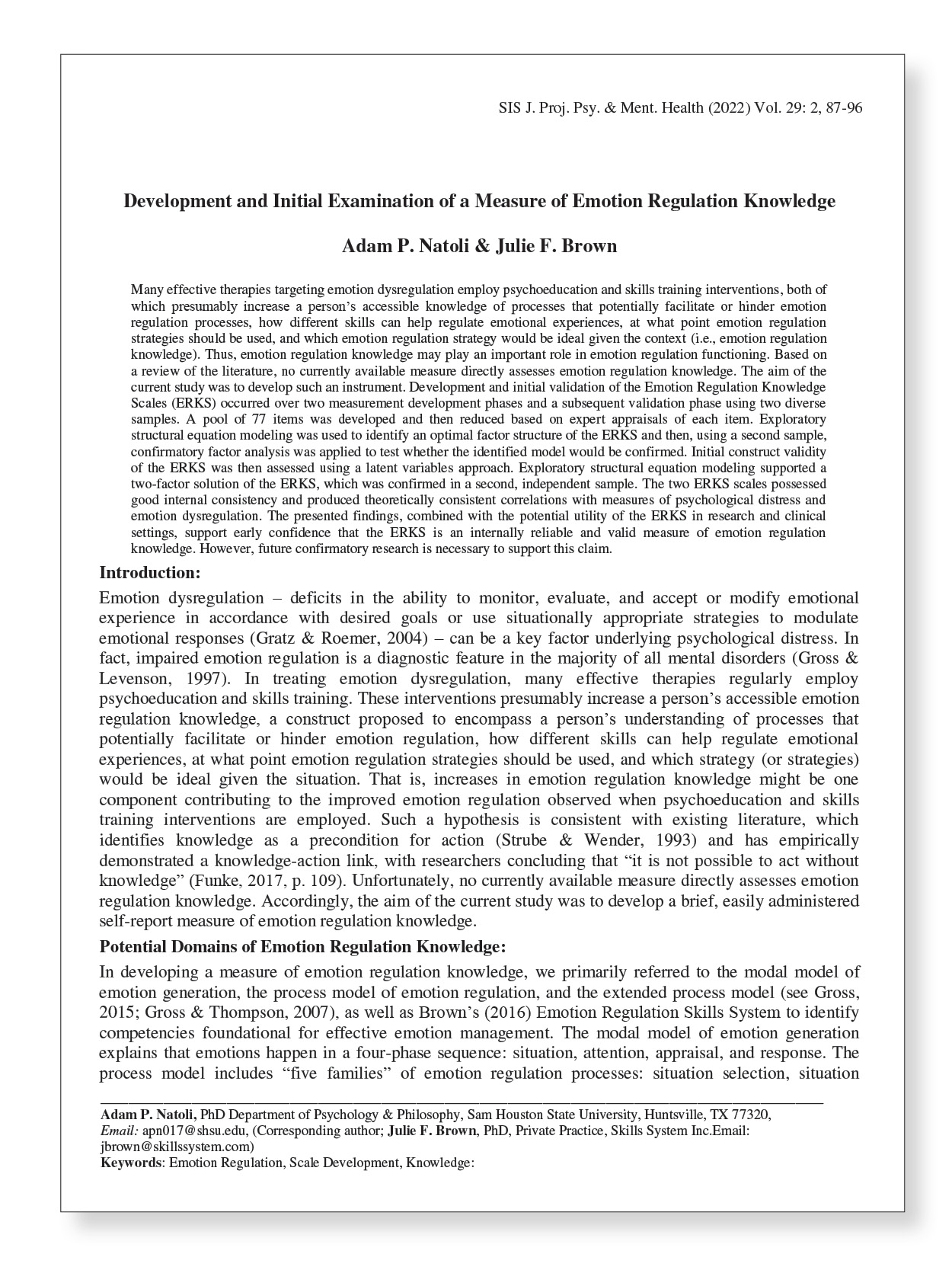 Title: Development and Initial Examination of a Measure of Emotion Regulation Knowledge

Abstract:
Many effective therapies targeting dysregulation employ psychoeducational and skills training interventions, both of which presumably increase a person’s accessible knowledge of processes that potentially facilitate or hinder emotion regulation processes, how different skills can help regulate emotional experiences, at what point emotion regulation strategies should be used, and which emotion regulation strategy would be ideal given the context (i.e., emotion regulation knowledge). Thus, emotion regulation knowledge may play an important role in emotion regulation functioning. Based on a review of literature, no current available measure directly assesses emotion regulation knowledge. The aim of the current study was to develop such an instrument. Development and initial validation of the Emotion Regulation Knowledge Scale (ERKS) occurred over two measurement development phases and a subsequent validation phase using two diverse samples. A pool of 77 items was developed and then reduced based on expert appraisals of each item. Exploratory structural equation modeling was used to identify an optimal factor structure of the ERKS and then, using a second sample, confirmatory factor analysis was applied to test whether the identified model would be confirmed. Initial construct validity of the ERKS was then assessed using a latent variable approach. Exploratory structural equation modeling supported a good internal consistency and produced theoretically consistent correlations with measures of psychological distress and emotional dysregulation. The presented findings, combined with the potential utility of the ERKS in research and clinical settings, support early confidence that the ERKS is an internally reliable and valid measure of emotion regulation knowledge. However, future confirmatory research is necessary to support this claim. 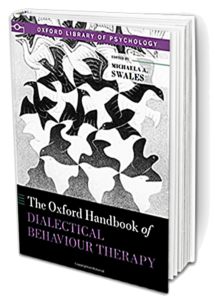 Individuals with intellectual disabilities (ID) experience heighten vulnerabilities related to complex biopsychosocial factors, yet have limited access to comprehensive psychologically-based treatments to address these pervasive problems. Dr. Brown, a DBT trainer with Behavioral Tech, LLC- Linehan Institute, was invited to write a book chapter about how to adapt DBT for individuals with ID. Dr. Brown was given permission to share this work with the stipulation that the following phrase be noted on the document: “This is a draft of a chapter that has been accepted for publication by Oxford University Press in the forthcoming book The Oxford Handbook of DBT edited by Michaela Swales due for publication in 2019”. It is important that practitioners have this information to help improve access to DBT for this under-served population.

The Skills System Instructor’s Guide: An Emotion Regulation Skills Curriculum for All Learning Abilities, in 2011.

Having the capacity to benefit from emotions, rather than being paralyzed by them, offers people the opportunity to navigate difficulties, while being able to face life, relationships, and themselves with courage, grace, and strength. In The Skills System Instructor’s Guide, author Julie F. Brown provides a curriculum for helping people improve emotion regulation capacities, which allows the person to actively participate in both joyful and challenging aspects of life.

Beyond the Surface of Consumer-Staff Relationships

Abstract:
The perspectives of individuals diagnosed with an intellectual disability and mental illness who demonstrate challenging behaviors are underrepresented in the literature.  The goal of this study was to explore the perspectives of consumers with a dual-diagnosis on their relationships with staff. This qualitative constructivist grounded theory study included 30 individuals with mild or moderate intellectual disabilities, at least one co-occurring mental health diagnosis, and a history of challenging behaviors.  Participants attended one of five 90-minute focus groups that addressed the topic of relationships; this analysis focused on disclosures that referenced consumer-staff relationships.  Consumers appeared to experience positive consumer-staff relationship processes when staff relationships were supportive, close, fostered personal growth, included reciprocity, generosity, preferred traits, and helped the consumer engage in activities.  Negative processes included staff exerting power differentials, being too directive, rushing or delaying, and invading privacy.  In approximately half of descriptions of negative relationship processes, consumers described engaging in “synthesis processes” (i.e., adaptive coping, conflict resolution, and integrating positive and negative perspectives about staff) that appeared to shift their perceptions about their relationships with staff from negative to more positive.  The implications of the findings in relation to what could be taught to staff and individuals with intellectual disabilities are discussed.

b. Comorbid mental health issues, and

c. Histories of CBs who were divided into five focus groups to discuss their perceptions about relationships.

This review will present observations about how intra-group communication patterns impacted the demonstration of cognitive strengths by participants in the focus group setting.

Intellectual Disabilities and Histories of Challenging Behaviors about Family Relationships: An Emergent Topic in a Grounded Theory Focus Group Study

Abstract:
Approximately one third of adults with intellectual and developmental disabilities have emotion dysregulation and challenging behaviors (CBs). Although research has not yet confirmed that existing treatments adequately reduce CBs in this population, dialectical behavior therapy (DBT) holds promise, as it has been shown to effectively reduce CBs in other emotionally dysregulated populations. This longitudinal single-group pilot study examined whether individuals with impaired intellectual functioning would show reductions in CBs while receiving standard DBT individual therapy used in conjunction with the Skills System (DBT-SS), a DBT emotion regulation skills curriculum adapted for individuals with cognitive impairment. Forty adults with developmental disabilities (most of whom also had intellectual disabilities) and CBs, including histories of aggression, self-injury, sexual offending, or other CBs, participated in this study. Changes in their behaviors were monitored over 4 years while in DBT-SS. Large reductions in CBs were observed during the 4 years. These findings suggest that modified DBT holds promise for effectively treating individuals with intellectual and developmental disabilities.